For my Facebook people, if you saw this already I apologize, I had to do a quick edit.

In search of coffee, Paul and I left Charlotte at 6 am bound for Chattanooga TN and LibertyCon 31. This was our first appearance at LibertyCon and it did not disappoint. As first timers, we were only on a few panels, but that allowed us to take full opportunity of the variety of content put on by this convention. But I digress: We arrived at LibertyCon set in Chattanooga TN on Friday around 1 pm. Our first event was a book reading at 2:00; the plan was a quick run to our hotel to check-in, freshen up after 6+ hours on the road and then off to the event. Unfortunately our room wasn’t ready yet, but the staff gave us a key to the parking garage so we could park our car and make it to our event in a timely manner. I should mention here that we stayed at the Chattanoogan Hotel, I would highly recommend this hotel if you are ever in the area. The staff was exceptionally friendly and helpful, the rooms were large and clean, the beds comfortable and most importantly, complimentary coffee in the lobby. Be warned, they don’t believe in decaf on days of the week that end in “Y”. And yes, the fire pit was burning every night…I’ll let that sink in – For those of you not familiar with the South during the summer, “hot and sticky” are not just quaint descriptors in novels and movies. Now off to the Con. Paul and I made it to check in in plenty of time to collect our bona fides and get to our reading in the Mountain Lookout Room. Paul chose to read chapter one from his newest book Malaise Falchion and then we took turns reading from Knight Errant Chapter ten and part of eleven. We had five people present for our reading (clearly not knowing who we were) but seemed to enjoy it anyway. Our most asked question is always how do two people with such a creative bent, write together without killing each other. I would refer you to an earlier blog post we did on that very topic, but I can’t seem to find it – so, no link here.  As Paul and I were together at the reading, and not yet thinking clearly enough about blog posts and such, we didn’t take a picture of our reading – insert sad face emoji here – sorry Catherine. (Catherine is one of our editors at Fiery Seas Publishing.)

After our reading we grabbed lunch at the Marriott Hotel – which was the host hotel and attached to the convention center. I only mention our lunch because they had a fried bologna sandwich on the menu. Now, here in the South that isn’t too out of the ordinary, but it is usually reserved for a locale a little less refined with a descriptor bearing the name: dive or greasy spoon. I should know, those are some of my favorite places to eat. See the above photo for proof. Therefore, as a self-proclaimed expert on the subject, I was pleasantly surprised “at how darned good” that sandwich was. As this blog post isn’t about food, I will simply say that if you are inclined for a fried bologna sandwich in Chattanooga TN…

On to the opening ceremonies: as opening ceremonies go, this one was well above average. The MC was Peter Gannon who was outstanding and put on an excellent presentation. He is well spoken, humorous and knows his audience. Gary Reinhart did a very cool version of the song Brandy about the family that puts on the event every year.

Before my panel at 7pm Paul and I decided to attend a workshop on Scrivener for writers. Paul is already a fan of the program but I still do everything in Word. After the presentation I was convinced to at least give it a try. There is a 30 day free trial that you can download. I should mention that the presenter is an author and in no way connected with Scrivener. After giving it a try, I will follow up with a review.

At 7pm I was one of the panelists on a presentation aptly called, “No sh**!!! There I was Minding my own business…” Again, they must not have known who I was, because the participants are all heavy hitters in the military and law enforcement realm. The panel was in one of the ballrooms and, as panels go, was a full house. When we first heard that the panel lasted for two hours, we were a little worried, however after it got going, it was clearly not enough time. Apparently, people in those particular professions can spin a pretty good yarn – or are full of it, I’ll let you be the judge. Either way, the audience stayed the entire time, so there must have been something entertaining going on. Most of the stories either involved alcohol or folks in various states of undress, so I guess there is a certain staying power. Keeping with the alcohol theme, after the panel, several of us continued the sea story session back at the bar where I met some fellow bloggers that I like to follow. Some of us even exchanged our newest books with each other. Very cool night and end to the first day.

After breakfast the next morning Paul and I had a private session for new writers with Bill Fawcett, who is a game designer and writer. He is also married to Jody Lyn Nye, so their credentials alone are worth listening to what they have to say. He answered our questions and offered seasoned advice on some of the pit falls of writing and some next steps we might want to consider. All in all an excellent meeting.

Next up was Author’s Alley, which is an area just outside of the dealers room where authors and artists can set up and promote their materials. Our session was from 1 pm to 3pm and we got to meet some new fans and interact with most everyone coming and going from the dealers room. Here was our table: Oh, I should mention that you know you are in a hotel when you spend $12 on a bowl of oatmeal. Not unexpected and yes, it was as good as it looks. Not only is Paul an author with Fiery Seas Publishing, but he is also with Copper Dog Publishing in their Sha’Daa anthology. They had their reading and new book release shortly after we finished selling our wares in Author Alley. Each writer in the anthology took a turn reading 5 minutes from their piece. After they were done they took questions from the audience. Sorry, again no pictures, I was busy during that panel enjoying a cold adult beverage with another writer I met on my earlier panel. But, continuing on the theme that there is more to Paul than just being an author, his day job is in the film industry. Here he is on a panel on the art of film making. Ignore the face he is making; let me just say that Paul has been in the business since he was 14 years old and has forgotten more than most people know about the making of film. He has done it all, from producer to grip but his current jobs are props and script supervisor. He also leads a panel on the unsung heroes of film making. If you ever get an opportunity to attend one of his panels, you won’t be disappointed.

LibertyCon had the Atlanta Radio Theatre Company (ARTC) attend and do a performance. This is a group that puts on live event like the radio shows of old. They did Terrific Park by George Alec Effinger and The Man Who Traveled in Elephants by Robert A. Heinlein. They were excellent and a great way to finish up a very busy day. Here is a promo picture from their web site to give you an idea of the setup. Sunday morning there is an event called Kaffeeklatsch where everyone who is an invited guest gets an opportunity to meet everyone else. Basically a big meet and greet with coffee and nabs. I got pulled in to a table with Paul full of movie makers. Not my forte but had a good time listening to them and had an opportunity to impart some knowledge on police and SWAT operations to an interested party currently working on a film involving just that.

After the Kaffeeklatsch, we headed to the dealer room for our final book signing. In theory, this is where people who bought your books earlier, can come to get you to sign them. In reality, most of the books had already been signed, but it was another opportunity to sell some product which we did. One patron came through and bought one of each. Apparently, he is a collector and does that every year. He said he just built a 20 by 40 room addition in his house to hold more books. Now that is a fan of the written word and I wish there were many more like him. I wish we could have gotten a picture with him at our table, but it didn’t work out. Here we are at the Sunday signing.

All in all an excellent Con and I hope we are invited back again next year. We hope to have two more books by then and Paul might have some of his movies to sell also. This particular convention sells out early as they only allow a limited amount of participants, this year it was limited to 750 people, but the entire event is for charity. This year all proceeds went to Room at the Inn.

Thanks to all who read this far in – and as always – support small pub and indi authors and buy our stuff!

Paul and I attended RavenCon13 or RavenCon 2018 depending on who you ask. It was the 13th Con held in 2018 if you are wondering. Had a great time and learned a lot from the gathering of misfits and geeks that are the SciFi writers and readers of the world – Rock On! or should that be Geek On? Either way we had a great time. I will follow Paul’s lead and bullet point my takeaways from the convention; with the exception of the first bullet point, they will be in no particular order. 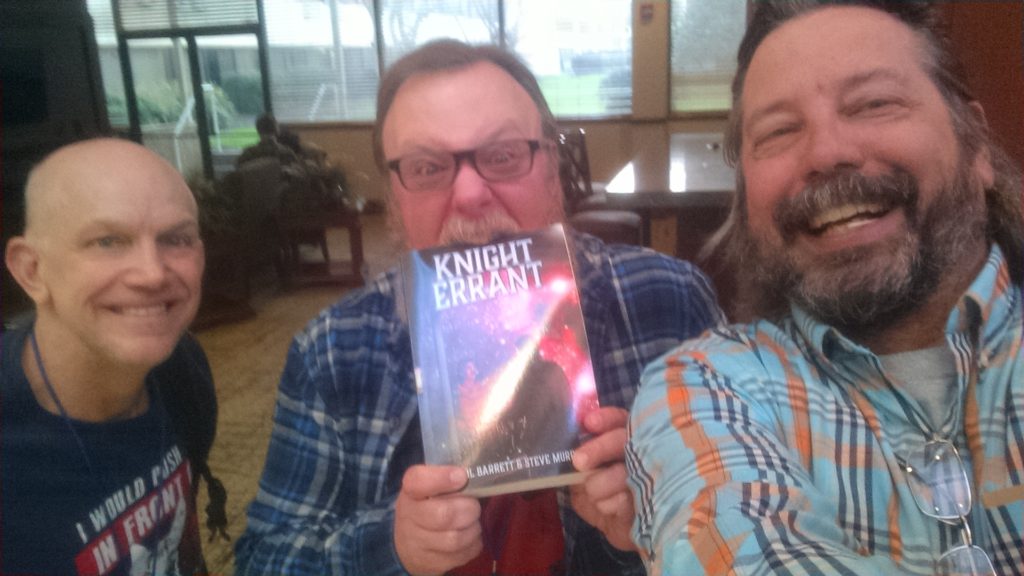 Like I said, get to know him, you will not be disappointed.

I will take a moment to mention a few of the panels that I thought were excellent. This is not to say that others weren’t, but these stood out in my mind.

Here we are at our book signing. 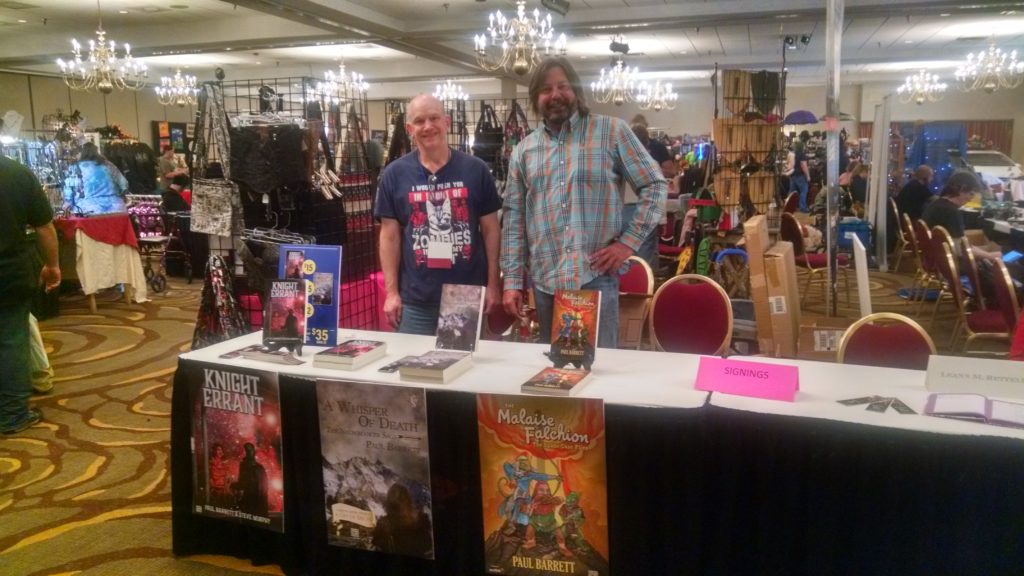 Our next convention will be LibertyCon in Chattanooga, Tn. on the weekend of June 29th. When we receive our itinerary, the panels we will be on and the times of our book signings, we will let you know.